The past weeks saw a string of Bitcoin analysts calling for a bull run towards $16,000, a level that it last tested in January 2017 during a corrective downtrend from its record high near $20,000.

The cryptocurrency breached $16,000 on November 11, 2020. Some traders sold-off their positions near the level, causing Bitcoin to correct below it. Nevertheless, any attempt to dump the price below $15,000 met with huge buying demand from traders with a medium- to long-term risk appetite. Hence, Bitcoin reclaimed $16,000 all over again.

Traders have refused to give up the level ever since. It appears like newfound support that could propel the Bitcoin price further higher. In the short-term, supporting the upside outlook is the uncertainty led by a rising number of coronavirus infections in the US.

People anticipate the government to reimpose strict social distancing measures that conflict with businesses that rely on close-human interactions. That could hamper the Donald Trump administration’s plans to reopen the US economy fully, thereby hindering a recent recovery in unemployment data and other US economy sectors.

Meanwhile, a worsening pandemic could fuel up the demand for the second coronavirus relief package. The Federal Reserve’s Chairman Jerome Powell warned in the latest officials meeting that their office could not go ahead with ultra-low interest rates and infinite bond-buying without a stimulus.

The relief bill is stuck for months due to a lack of bipartisanship between the Democrat-controlled House of Representatives and the majority-Republican Senate.

An ongoing run-off for two Georgia Senate seats is now the primary focus. Should the Joe Biden-led Democrats win both, their control over Senate would make it easier to pass the second coronavirus package.

If not, then the US economy’s only bullish hope is the vaccine, especially after Pfizer and its pharmaceutical partner BioNTech’s announcement last week. They claimed that their experimental COVID-19 showed 90 percent efficacy.

Both the fundamental drivers offset one another. That allows investors to stay hedged in assets that have the least correlation with the macroeconomic events.

Bitcoin, as a result, is doing better than most of its safe-haven rivals.

The cryptocurrency rose incredibly higher against the vaccine news. On the other hand, its top competition gold logged its worst single-day performance in a decade. The cryptocurrency now expects to trade cautiously near $16,000 until further clarity from the US political and economic space.

Technically, Bitcoin is at an impasse near $16,156 based on a Fibonacci retracement graph drawn from a swing high of $19,697 to a swing low of $3,153. The coronavirus-induced market uncertainty could have traders sell the local top and target lower levels for re-accumulation. 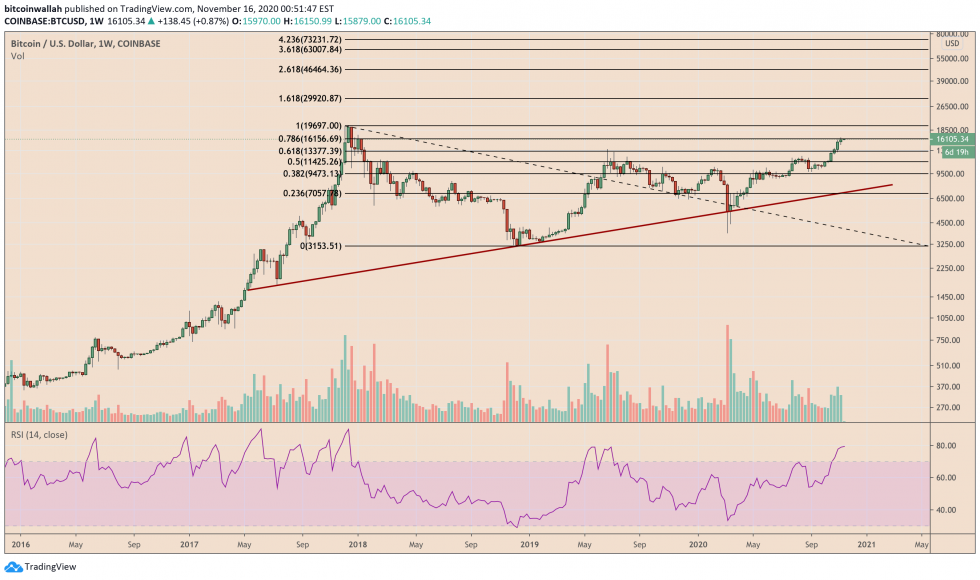 Bitcoin’s next weekly breakout expects to take its price near $20,000. Source: BTCUSD on TradingView.com

Losing $16,000 at this stage would mean an extended downside correction towards $15,000 or below.

Holding it, at the same time, would clear the run towards $17,000 or above. But with two offsetting fundamentals and the US presidential election in rearview, Bitcoin has more reasons to wait-and-watch than it has to continue its uptrend towards another yearly high.

By The Numbers: A Bitcoin Bear Market Without BitMEX

Data: Most Bitcoin Mining Firms Have Lost Money Over The Years

Don’t Fight The Fed: FOMC Meeting Is Most Volatile For Bitcoin Ever

Why Devcon 7 Should Be in Istanbul

Admin - September 23, 2022 0
Hosting Ethereum’s biggest event in Turkey can build on what is already strong interest in blockchain and crypto technology. Source link

Admin - September 28, 2022 0
Saitama is a Web 3.0 innovation company that focuses on a decentralized money ecosystem for daily existence. The innovations such as blockchain and digital currencies...

Jack Dorsey’s TBD Teams Up With Circle to Take US Dollar...

The Strong Part of Bitcoin Upmove Hasn’t Even Started